Samsung launched its first-ever foldable phone in 2019. However, because of some major issues, the smartphone went in vain. Later, in the year 2020, the brand came back with another foldable smartphone that addressed those major issues. Hence, the Galaxy Z fold 2 turned out to be the best foldable phone of 2020. And now, the brand is here with Samsung Galaxy Z Fold 3 which brings several improvements over its predecessor. With the latest flagship hardware and updated design, the smartphone is less expensive than its predecessor. Here’s everything you need to know about this foldable smartphone:

The display on the Samsung Galaxy Z Fold 3 is smaller, slimmer, and lighter. The smartphone comes with a 6.2-inch outer display with 387 PPI density and a resolution of 2268 x 832 pixels. Although this is the same as that of the previous model, there are certain improvements in this latest launch. The device gets a Dynamic AMOLED display panel with a support of a 120 Hz refresh rate. The outer screen is also protected by Gorilla Glass Victus protection. On the other hand, the smartphone gets a 7.6-inch display on the inside. It also comes with 2208 x 1768 pixels and 374 PPI density. Additionally, the device now includes an under-display camera sensor and offers IPX8 water resistance.

Samsung Galaxy Z Fold 3 mobile keeps the same triple rear camera setup as that of its predecessor. It comprises a 12MP f/1.8 primary camera with optical image stabilization (OIS) and Dual Pixel Auto-focus joined by a 12MP f/2.2 ultra-wide camera with a 123° field of view and a 12MP f/2.4 telephoto camera with Dual OIS, PDAF, 10x digital zoom, and 2x optical zoom. As far as the front-facing camera is concerned, the handset comes with two selfie cameras. While the first one is a 10MP f/2.2 lens housed within a hole-punch cutout on the outer display, another one comprises a 4MP f/1.8 sensor on the inside. The latter one, as mentioned above, is placed under the display.

As all the above features already make the smartphone a breathtaking one, its performance is what forms the basis of the Samsung Galaxy Z Fold 3. The device is powered by Snapdragon 888 processor and gets an Adreno 660 GPU. Besides this, the smartphone features up to 12 GB of RAM paired with 256GB/512GB of internal storage. The handset houses a 4,400 mAh battery, which is slightly smaller than the previous model. It also offers 25W wired fast charging support as well as 10W wireless charging support. Samsung Galaxy Z Fold 3 gets a 5G support. Further, it gets Wi-Fi 802.11, Wi-Fi 802.11, Bluetooth v5.0, 4G, 3G, 2G, A-GPS, NFC and USB Type-C. 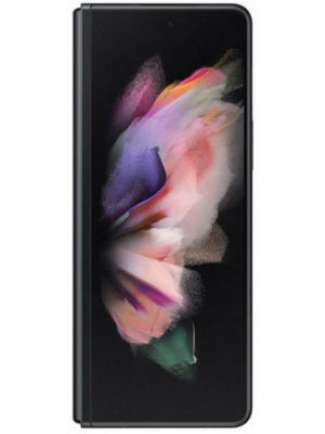 The Samsung Galaxy Z Fold 3 is rated as waterproof by the manufacturer.

Yes, the Samsung Galaxy Z Fold 3 can be charged wirelessly.