Motorola A50 Price in India

Motorola A50 price starts from ₹1,549. The Motorola A50 specifications and features can be found below. Motorola A50 mobile is available in Rose Gold colours in India.

The Moto A50 mobile is an excellent feature phone with many functions to make your day enjoyable and productive. A 1,750mAh battery powers the device, which provides a typical viewing experience. It supports 2G networks in terms of connectivity. Moto has included a single camera configuration in this phone, surprising. In India, the Moto A50 begins at Rs. 1,549. At amazon.in, the Moto A50 is available for Rs. 1,549. This is the Rose Gold base edition of the Moto A50 with 4 MB RAM and 4 MB internal storage.

On the back of the Moto A50 new model, there is a single 0.3MP primary camera and a flashlight. In addition, the camera includes Digital Zoom and is capable of recording images with a resolution of 640 x 480 pixels.

Within the Moto A50 mobile, the company has gone with a 1,750mAh battery. Furthermore, the device's Li-ion type battery can be removed by removing the back panel. The internal capacity of the Moto A50 may be expanded up to 32GB using a microSD card. The device enables 2G network connections for voice calls. It has two SIM card slots, one for GSM and the other for CDMA. Another connectivity feature included is Bluetooth. 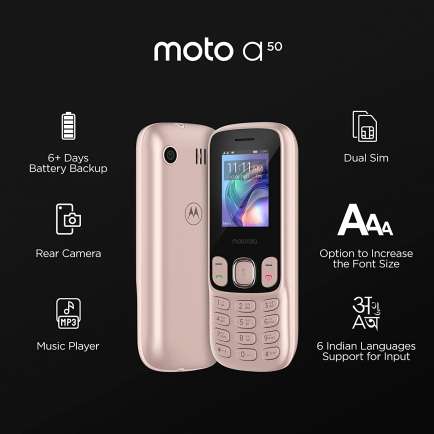