This product is not going to release in India.
Size
Color
Key Specification

If a selfie camera is what you consider while buying a smartphone, then Itel S17 will be the right choice for you!

This entry-level smartphone has already made its way to the Nigerian market and is all set to roll out in India by next year in January with the Itel S17 price expected to be Rs. 8,290. Other than the selfie camera, the smartphone also includes a triple rear camera setup and 5000 mAh battery. The colour options for this smartphone are - Green, Deep Ocean Black and Sky Blue.

The newly launched Itel S17 is equipped with a 6.6 inch, 2.5D curved glass IPS LCD display. It supports an aspect ratio of 20:9, pixel density of 267 PPI and a screen resolution of 720 x 1612 pixels. Moreover, the device features a waterdrop notch feature with a narrow bottom bezel. Not to forget the screen to body percentage which is 90%. Thus, making it optimized for viewing pleasure. The device also comes with a face unlock too.

As mentioned above, the Itel S17 is a selfie camera, hence it comes with an AI front camera that clicks pictures of you when it detects your smile. It comes with a single 5-megapixel front camera with the feature of AI face beauty 4.0 that redefines facial details, lightning environment as well as skin tone for the users. Talking about the rear camera, the smartphone comes with a triple rear camera i.e., an 8 megapixel along with the features like LED flash, Autofocus, Digital Zoom and Face detection.

The apps on this new phone are optimised by i-boost which is a new AI feature that makes smartphone operations faster and smoother. Itel S17 is equipped with an unknown 1.3GHz quad-core processor, which is assembled with 1 GB RAM and 16 GB of in-built storage. The latter one can be expanded further up to 128 GB using a microSD card. The device is based on Android Go and it runs on Android 11. The other USPs of this device are something like this - a Li-ion 5000 mAh non-replaceable battery, rear fingerprint sensor and audio jack of 3.5 mm. Last but not least, the connectivity options include 4G, 3G, 2G, Wi-Fi 802.11, Mobile hotspot, Bluetooth, A-GPS and USB charging. 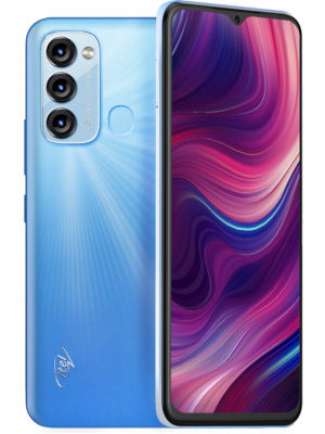 The Itel S17 does not feature 5G connectivity.

No, the Itel S17 does not pack Quick Charging support.

The Itel S17 is not rated as waterproof by the manufacturer.

No, the Itel S17 cannot be charged wirelessly.