IAir D24 price starts from ₹1,025. The IAir D24 specifications and features can be found below. IAir D24 mobile is available in Blue, Maroon, Aqua Green colours in India.

Feature phones are still prevalent in our country. People who are not tech-savvy and consider mobile phones only as a mode of calling, messaging, and listening to music tend to use basic phones only. Thus, keeping this in mind, IAir recently launched IAir D24 in January 2022 in India. The IAir D24 price is Rs. 1,025 having the memory configuration of 32MB RAM and 32MB in-built storage. The available colors of this mobile are Blue, Maroon, and Aqua Green.

On the design and display part, the device gets the 1.77-inch TFT display panel which has a screen resolution of 128 x 160 pixels. It further gets a pixel density of 116 PPI and an aspect ratio of 5:4. The weight of the device is 300g.

The IAir D24 features a single rear camera setup that offers an 0.8 MP Primary Camera beside LED flash. The rear camera arrives with the Digital Zoom feature. The image resolution is 1024 x 768 Pixels.

As stated above, the IAir D24 mobile is paired with 32MB RAM and 32MB storage. The storage can be expanded up to 8GB via a MicroSD card. Furthermore, the mobile houses a Li-ion 1200 mAh non-replaceable battery. In terms of connectivity options, the device includes 2G, Dual Sim, Bluetooth, Infrared, and 3.5mm Audio Jack. 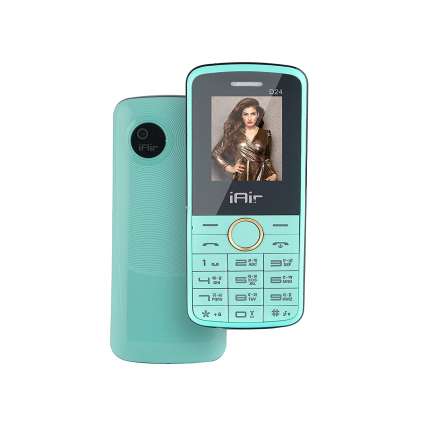