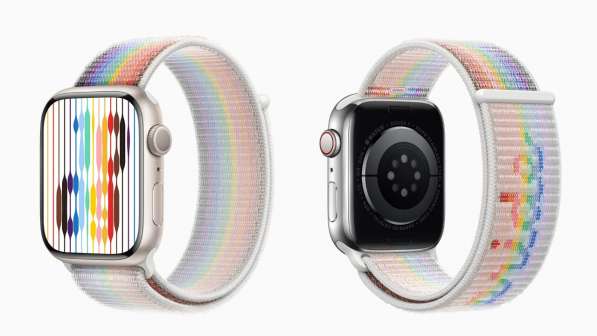 According to Apple, the Pride Edition Sport Loop was created using a new technique that revealed the word "pride" written in a cursive style inspired by the original "hello" greeting. It was displayed on the first Macintosh in 1984 by removing several of the double-layer nylon-woven textile loops on the band.

The Pride Edition Sport Loop features a colour gradient that includes colours from numerous pride flags, with light blue, pink, and white symbolising transgender and gender-nonconforming people and black and brown hues representing Black and Latinx people. These colours also symbolise HIV/AIDS patients and those who have died from the disease.

The Pride Edition Nike Sport Loop, on the other hand, is designed in a rainbow of hues to recognise LGBTQ+ individuals "who are expanding sport for future generations and empowering others to feel the joy of becoming themselves authentically."

Colourful threads on the Pride Threads watch face replicate the woven loops on the Pride Edition Sport Loop, which move as you rotate the Apple Watch's digital crown, tap its display, or elevate your wrist. Both watch faces can be downloaded right away from the Apple Watch app. It is compatible with Apple Series 4 or later and iPhone 6S running iOS 15.5 or later.

Apple also unveiled a new Shot on iPhone Pride Campaign, which will debut on @apple on Instagram next month, in addition to new Pride Edition bands and watch faces.